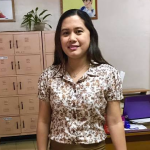 The activity started with a prayer led by Elora Margareth Cabag, followed by the opening remarks given by Gloryvill Falsis, who were both tenured members of the said club. Afterward, games were held for the children and were facilitated by the club.

After the demonstration, the IP’s, together with the club and some faculty members, shared snacks to the recipients. Gifts, including school bags for children, rice, clothes, and other health supplies, were also given.

“I felt happy that I got to share my blessings with others and I made them happy through simple things during Christmas season,” said Dayne Clarisse Giner, a club member.

The club plans to continue the said activity in its succeeding years.

Congratulations to our new lawyers for passing the BAR EXAM! We are proud of you!